Convenant University student identified as Dami who was declared missing was actually meeting her boyfriend in another state (Oyo) and the boyfriend, Mark Ikotun was among those asking to help find her on social media

Nigerians have reacted angrily to the story of a young lady named Dami who allegedly faked her kidnap to see her lover in Ibadan.

Social media is agog this morning with the story of a Covenant University student who faked her kidnap so she can go to Ibadan to meet her boyfriend. To make matters worse, all the while she was with her boyfriend, he was one of those tweeting for people to help find her.

The lady named Damilola went from Lagos to Ibadan to see Mark Ikotun. Friends and family feared she had been kidnapped and they issued a missing person alert. The boyfriend she was with also led the search for her on social media and was begging for her return.

She later returned claiming she had been kidnapped and raped, causing her friends and family distress.

But it was later discovered that she staged her kidnap with her boyfriend. Now, her friends are calling her out on social media.

See some tweets made when she was declared missing.

Nigerians have now joined in the conversation to condemn the alleged act. This incident inspired the trending hashtag #LagostoIbadan on Twitter. 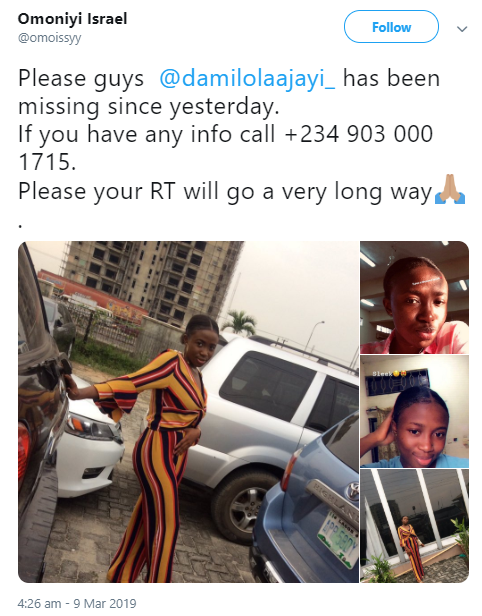 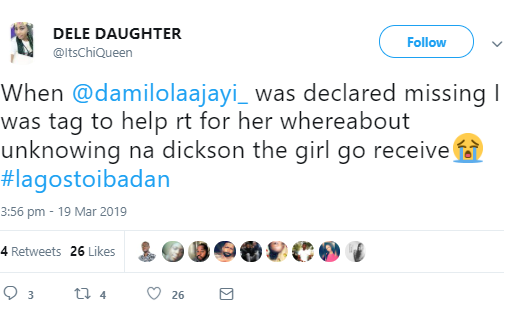 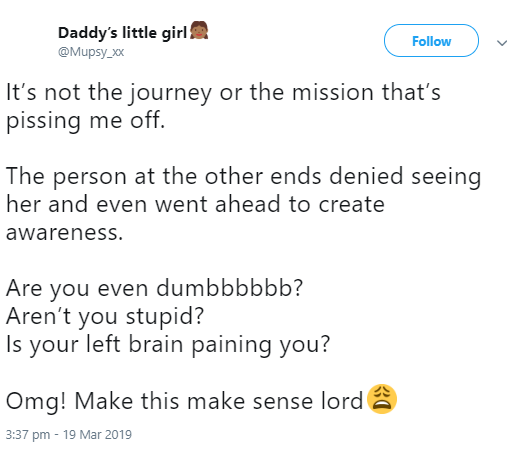 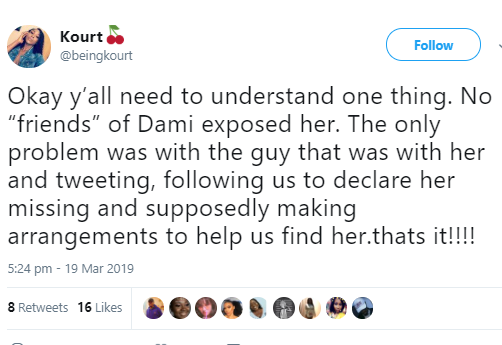 Nigerian man narrates his heartbreaking encounter with a former fashion designer who became broke and now sells oranges on the streets of Lagos.

I was hired to disrupt peaceful #EndSARS protests in Abuja – Pro-SARS supporter caught...

News Linda Aliemeke - October 20, 2020
0
A Pro-SARS supporter has been caught on tape admitting he was hired to disrupt peaceful #EndSARS protests in Abuja.  In...

#EndSARS: There is a need for a total shutdown until politicians start to answer...

Celebs Linda Aliemeke - October 20, 2020
0
Nigerian singer, 2Face has stated that there is need for a total shutdown in the country amid the #EndSARS protest.

I volunteer to be the leader of the #EndSARS protest – Governor Yahaya...

News Linda Aliemeke - October 20, 2020
0
Governor Yahaya Bello of Kogi state has again weighed in on the #EndSARS protest by volunteering to be the leader.

I’m too young to have a boyfriend – Iyabo Ojo’s daughter,...